Does your car rattle? Does your engine smell like rotten eggs? Then you’re likely dealing with a catalytic converter problem. Unfortunately, there aren’t many long term solutions to fixing your car beyond getting the converter completely replaced. Price points can vary, but before you spend thousands getting the car fixed, you should have a brief rundown on why the problem is happening and a couple of your options.

What is a Catalytic Converter

The catalytic converter exists to control the level of emissions coming from your car. It blocks the harmful tailpipe emissions that get released as the engine runs. It’s welded in the exhaust pipe, after the manifold and in front of the muffler. The inside of the part itself is shaped like a honeycomb or web and contains particles that react with the emissions, burning them up before they’re released. 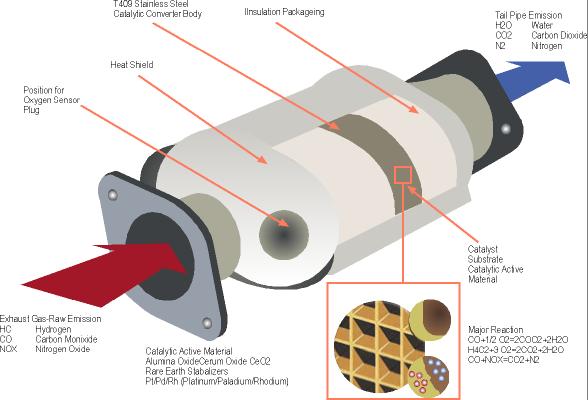 Basically, the converter is a filter. On the outside it might look like a muffler, but part of what makes catalytic converters so hard to repair is their specialized structure. Inside, the exhaust passes through that structure, and the gases that make up the emission react to the chemicals built into the converter like platinum and rhodium. The exhaust meeting the converter creates a chemical reaction that makes the exhaust superheat and break down into less harmful gases before they’re released.

Can You Drive a Car with a Bad Catalytic Converter

A broken catalytic converter can lead to a number of problems, even making the car impossible to drive. If the converter is in really bad shape it can clog the flow of exhaust or lead to engine failure. On top of that you’ll experience a bunch of car troubles while trying to drive it. The check engine light will be on, the engine can stall, there’ll be a sulphurous odor, the converter will rattle, and the converter can burn and cause a fire.

These problems will also mean that your car won’t be able to pass a state car inspection. This is because most state inspections measure the car’s emissions, because the converter acts as a filter, if there’s a problem with it the car will release harmful pollutants. If this is the case, the car can’t be licensed to be on the road, and without that inspections sticker you’ll be subject to harsh fines.

This means of course that you can’t simply remove a broken converter, and because they’re so complicated, they can’t be repaired long-term. If there’s a problem with the catalytic converter, eventually you will have to have it replaced or get a new car altogether, because once a car has failed an inspection for smog testing it can’t be driven legally until it passes.

You won’t want to drive a car with this type of damage anyways. The fuel economy will plummet because the exhaust gets clogged and won’t be able to run as well. This means that a damaged converter can ruin your engine as well, leading to even bigger problems.

How Much Does it Cost to Fix A Catalytic Converter

Overall, it’s just not worth driving a car with a bad catalytic converter. Unfortunately, getting the problem fixed can be very expensive. Like most repairs, getting a replacement converter will range in prices depending on what kind of car you have. However, in general the cost will be in the range of $900 to $2500.

When factoring in that cost you also had to add on the cost of the labor on the part of the mechanic replacing the converter, as well as the cost to have a diagnostic done on the car. This cost will skyrocket if the issue causes problems with other parts of the car, like the engine, sensors, or muffler. This all means it might not be worth it to have the part replaced.

The catalytic converter is a complicated component and for that reason, it might be more cost-efficient to shop for a new car.